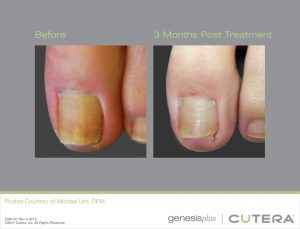 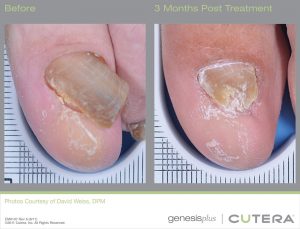 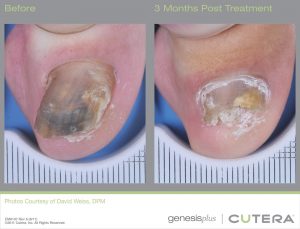 Of all toe nail disorders, fungal infections are responsible for approximately half. Known as onychomycosis, the condition is especially common on the toes versus the fingernails, as the toes are subject to the warm and moist environment within shoes and socks.

In the early stages, toe nail fungus may produce few or no symptoms, instead appearing only as a small white or yellow spot beneath the toe nail. Over time, however, untreated fungal infections can worsen, causing serious damage to the affected toe nail. It is not uncommon for advanced toe nail fungus to cause discoloration, thickened nails, or nails that are degenerating along the edges.

In the past, toe nail fungus was treated only by medications or surgical interventions. Today, there are new technologies available to help treat toe nail fungus and restore the appearance of a strong and healthy nail. Laser-based therapy, which is both safe and effective, generates light pulses that target the fungus growing beneath the nail. The laser helps destroy the fungus without causing damage to the nail or surrounding skin.

Laser toe nail fungus treatments typically take less than a half hour, and most people can return to work or other activities immediately after. They may be administered alone or in combination with other toe nail fungus treatments, such as oral medications. As the nail grows out over time, many people who have undergone laser treatment find that the treated nail is growing stronger, clearer and healthier, free of fungus and its symptoms.

You don’t have to settle for toe nail fungus pain or be self-conscious about the appearance of an infected toe nail. Contact our office for more information about toe nail fungus treatment and whether it could be right for you. Whether you live in Pasadena, Downey, West Los Angeles, Pico Rivera, or surrounding areas, Varicose Vein Laser Center can help.